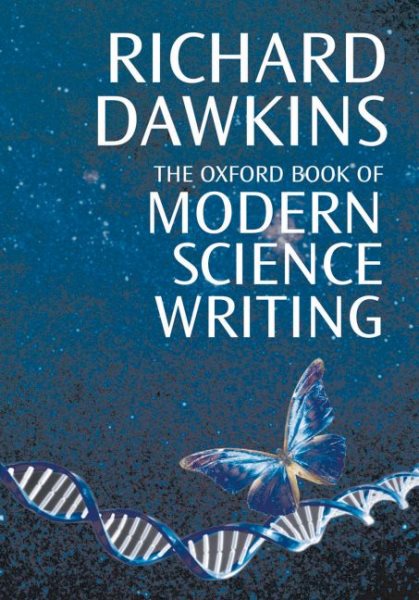 A rich and vibrant multi-disciplinary anthology that celebrates the finest writing by scientists captures the poetry and excitement of scientific thought and discovery, in pieces by Stephen Pinker, Albert Einstein, Stephen Jay Gould, Julian Huxley, Loren Eiseley, Rachel Carson, J. Robert Oppenheimer, Freeman Dyson, and many other notables. Read More
Boasting almost one hundred pieces, The Oxford Book of Modern Science Writing is a breathtaking celebration of the finest writing by scientists--the best such collection in print--packed with scintillating essays on everything from "The Discovery of Lucy" to "The Terror and Vastness of theUniverse." Edited by best-selling author and renowned scientist Richard Dawkins, this sterling collection brings together exhilarating pieces by a who's who of scientists and science writers, including Stephen Pinker, Stephen Jay Gould, Martin Gardner, Albert Einstein, Julian Huxley, and many dozens more.Readers will find excerpts from bestsellers such as Douglas R. Hofstadter's Godel, Escher, Bach, Francis Crick's Life Itself, Loren Eiseley's The Immense Journey, Daniel Dennett's Darwin's Dangerous Idea, and Rachel Carson's The Sea Around Us. There are classic essays ranging from J.B.S. Haldane's"On Being the Right Size" and Garrett Hardin's "The Tragedy of the Commons" to Alan Turing's "Computing Machinery and Intelligence" and Albert Einstein's famed New York Times article on "Relativity." And readers will also discover lesser-known but engaging pieces such as Lewis Thomas's "SevenWonders of Science," J. Robert Oppenheimer on "War and Physicists," and Freeman Dyson's memoir of studying under Hans Bethe. A must-read volume for all science buffs, The Oxford Book of Modern Science Writing is a rich and vibrant anthology that captures the poetry and excitement of scientific thought and discovery.One of New Scientist's Editor's Picks for 2008 Read Less

Goodreads reviews for The Oxford Book of Modern Science Writing

The Greatest Show on Earth: The Evidence for Evolution