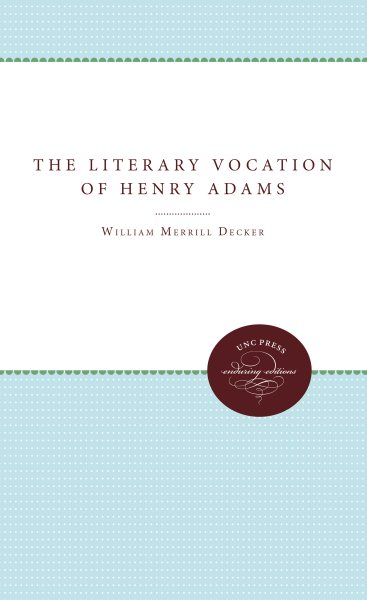 Literary Vocation of Henry Adams Read More
In the mid-1880s, Henry Adams committed himself to a posture that has since been associated with his name: neglected patrician, doomsayer, literary man whose bereavement at his wife's suicide confirmed his abandonment of an active public life. Adams (1838-1918) defined himself as other than contemporary Americans. Yet he also cast himself as the Republic's last true patriot, and beneath his reticence lay the firm belief that he was the one man who could save America -- if only his voice were heard.This insightful book focuses on the relationship between Adams and his audience, emphasizing Adams's rhetorical strategies in his effort to shape a dialogue with his readers. Throughout his literary career, Adams struggled to redefine America's role as a nation of millennial promise. All the while, he was faced with mounting evidence that his country was rapidly squandering its opportunity to act as a redemptive force. William Decker explores Adams's ambition to impress this view of the Republic on the national mind and his persistent desire to create a text that would direct, both by its rational persuasiveness and by its symbological appeal, the course of an America destined to become a great world power.After his wife's suicide in 1885, Adams increasingly felt the burden of what he perceived as a historical and cosmic opposition to the millennial America in whose advocacy he had originally taken up his vocation. He revised his authorial ends and means, assuming ever more clearly the part of the voice crying in the wilderness. Although he would routinely despair of his country's public destiny, his pen would remain active as long as he lived, narrowly affirming the redemptive historical possibility.The Literary Vocation of Henry Adams is a comprehensive reading of Adams's works, giving careful attention to texts that have generally been considered minor as well as to better-known works like U.S. histories and Mont Saint Michel and Chartres. Discussions of Adams's most widely read and appreciated work, The Education of Henry Adams, frame Decker's arguments. He examines the Education as the valedictory statement and enactment of Adams's ambitions as an author--and as the ultimate measure of his success.Originally published in 1990.A UNC Press Enduring Edition -- UNC Press Enduring Editions use the latest in digital technology to make available again books from our distinguished backlist that were previously out of print. These editions are published unaltered from the original, and are presented in affordable paperback formats, bringing readers both historical and cultural value. Read Less

Goodreads reviews for The Literary Vocation of Henry Adams

The Prize Winner of Defiance, Ohio: How My Mother Raised 10...