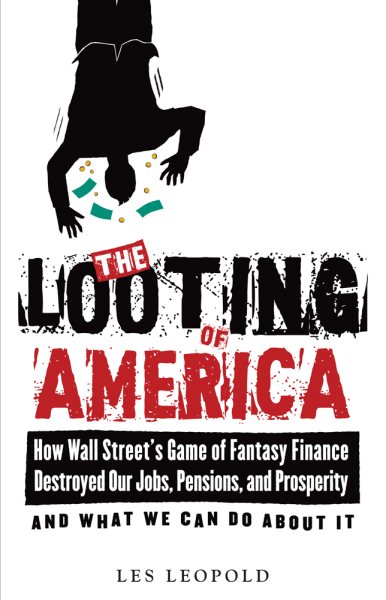 How could the best and brightest (and most highly paid) in finance crash the global economy and then... Read More
How could the best and brightest (and most highly paid) in finance crash the global economy and then get us to bail them out as well? What caused this mess in the first place? Housing? Greed? Dumb politicians? What can Main Street do about it?In The Looting of America, Leopold debunks the prevailing media myths that blame low-income home buyers who got in over their heads, people who ran up too much credit-card debt, and government interference with free markets. Instead, readers will discover how Wall Street undermined itself and the rest of the economy by playing and losing at a highly lucrative and dangerous game of fantasy finance.He also asks some tough questions:Why did Americans let the gap between workers' wages and executive compensation grow so large?Why did we fail to realize that the excess money in those executives' pockets was fueling casino-style investment schemes?Why did we buy the notion that too-good-to-be-true financial products that no one could even understand would somehow form the backbone of America's new, postindustrial economy?How do we make sure we never give our wages away to gamblers again?And what can we do to get our money back?In this page-turning narrative (no background in finance required) Leopold tells the story of how we fell victim to Wall Street's exotic financial products. Readers learn how even school districts were taken in by "innovative" products like collateralized debt obligations, better known as CDOs, and how they sucked trillions of dollars from the global economy when they failed. They'll also learn what average Americans can do to ensure that fantasy finance never rules our economy again.As the country teeters on the brink of what could be the next Great Depression, we should be especially wary of the so-called financial experts who got us here, and then conveniently got themselves out. So far, it appears they've won the battle, but The Looting of America refuses to let them write the history--or plan its aftermath. Read Less

Goodreads reviews for The Looting of America: How Wall Street's Game of Fantasy Finance Destroyed Our Jobs, Pensions, and Prosperity—and What We Can Do about It

Yesterday: One room schools in the Buckeystown, Ballenger, a...