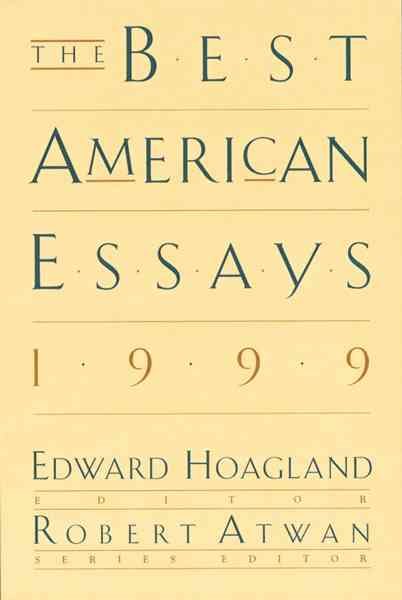 Compiles the best literary essays of the year originally published in American periodicals Read More
This year's wonderfully diverse collection, which features such respected writers as Joan Didion, Annie Dillard, Ian Frazier, Mary Gordon, and Arthur Miller. These essays range widely across the American landscape -- from a California monastery to a Manhattan apartment -- and along the way introduce us to a fine array of talented new voices. Called by John Updike "the best essayist of my generation," Hoagland has assembled a powerful volume that vividly showcases the art and craft of the contemporary essay. IN SEARCH OF PROUST by Andre Aciman, TORCH SONG by Charles Bowden, COMPRESSION WOOD by Franklin Burroughs, VISITOR by Michael W. Cox, LAST WORDS by Joan Didion, FOR THE TIME BEING by Annie Dillard, THE METEORITES by Brian Doyle, A LOVELY SORT OF LOWER PURPOSE by Ian Frazier, VICTORIA by Dagoberto Gilb, STILL LIFE by Mary Gordon, A WEEK IN THE WORD by Patricia Hampl, THE COUNTRY BELOW by Barbara Hurd, THE LION AND ME by John Lahr, MAKING IT UP by Hilary Masters, ON THE FEDALA ROAD by John McNeel, AMERICAN HEARTWORM by Ben Metcalf, BEFORE AIR CONDITIONING by Arthur Miller, AFTER AMNESIA by Joyce Carol Oates, THE IMPIOUS IMPATIENCE OF JOB by Cynthia Ozick, PLANET OF WEEDS by David Quammen, ON SILENCE by Daisy Eunyoung Rhau, BEAUTY by Scott Russell Sanders, HITLER'S COUCH by Mark Slouka, WHAT'S INSIDE YOU, BROTHER? by Toure, FOLDING THE TIMES by W. S. Trow. Read Less