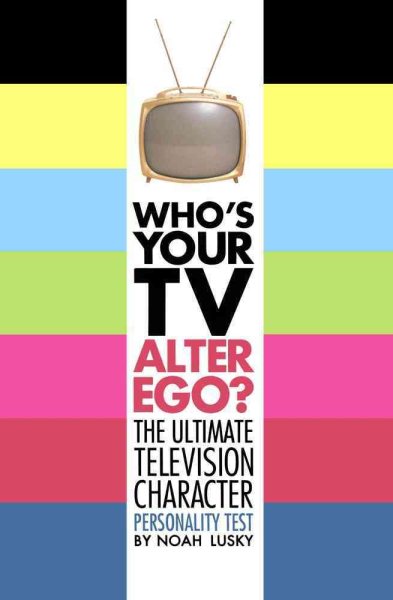 Provides dedicated television viewers with a series of personality quizzes through which fans can identify their on-screen alter egos, in a lighthearted guide that draws on the qualities of characters from fifty classic and contemporary hit shows. Original. 15,000 first printing. Read More
ARE YOU A JERRY OR AN ELAINE? Or maybe you've been living life as a compulsive Monica, when all along there's a carefree Phoebe just waiting to get out? Now's your chance to learn the truth, without having to step foot inside a single comedy club or coffeehouse. Who's Your TV Alter Ego? will help you unearth your Simpsons soul mate, inner desperate housewife, OC BFF, and much, much more. This is no trivia book: Who's Your TV Alter Ego? is like Mad Libs, the Cosmo Quiz, and a Rorschach blot all rolled into one, and can be played alone or with a live studio audience. More than fifty classic and contemporary hit TV shows are featured, each with a list of ten questions designed to playfully probe your innermost thoughts. Each quiz will match you -- or someone you know -- with a TV character and reveal the personality traits you share: the good, the bad, and the hilariously ugly. So put down the remote and pick up a pencil. This may well be the most important test you ever take. 52 tests in all, including the characters from: 52 TESTS IN ALL, INCLUDING THE CHARACTERS FROM: • Grey's Anatomy • Friends • Heroes • Project Runway • Sex and the City • 24 • The Cosby Show • The Brady Bunch • The Sopranos • Star Trek • Gilligan's Island • Lost • Seinfeld ...AND ALL THE REST OF YOUR FAVORITES! Read Less

For Every Dog an Angel

Intimacy Ignited: Conversations Couple to Couple: Fire Up Yo...

Iceberg Dead Ahead! (The Urgency of "God-seeking Repentance"...