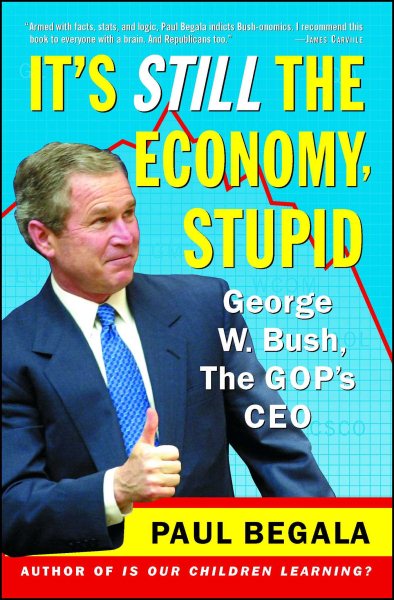 Explains how the strong economy of the Clinton era has been eroded by George W. Bush's economic policies, resulting in a rise in unemployment and billions of dollars of investment losses. Read More
When he took office in 2001, George W. Bush inherited the strongest economy in American history. He inherited the largest federal budget surplus in American history -- and the prospect of paying off the entire national debt in just eight years. He inherited a strong dollar and sound fiscal policy. He inherited a nation whose economy was so strong that commentators who just a decade before were predicting American decline were now complaining about American dominance. And yet, Dubya blew it. Squandered everything he'd inherited from President Clinton. We thought if Junior was good at anything, it was inheriting things. It's Still the Economy, Stupid is the story of how America's CEO -- our first MBA president -- has trashed our economy. It shows: &#149; How he wasted the surplus on massive tax cuts for the hyper-rich. &#149; How he talked down the economy for his short-term political gain, then passed an economic program that has put 1.8 million Americans out of work and cost investors $4.4 trillion. &#149; How he abandoned his free-trade rhetoric to adopt protectionist tariffs, effectively raising taxes on consumers. &#149; How he walked away from needed investments in education, training, and all the things that make us smarter, safer, and stronger economically. &#149; How he plans to go on from here to cripple Social Security and to allow the privileged to avoid even more taxes. It makes you wonder: What do they teach you at Harvard Business School? Read Less

You're Fired: The Perfect Guide to Beating Donald Trump