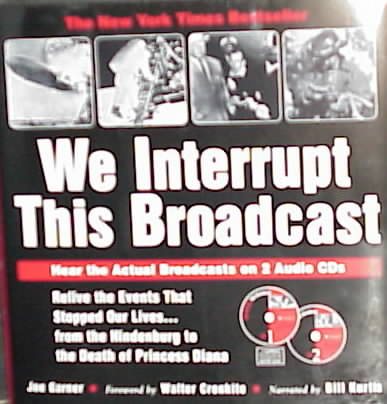 Describes such radio and television news stories as the attack on Pearl Harbor, the Kennedy assassinations, and the Challenger explosion Read More
Presents b&w photographs, accompanied by event summaries, of 38 major crises and disasters which still pull on American heartstrings, from the explosion of the Hindenburg in 1937 to the death of Princess Diana in 1997. More emotionally powerful than the text are two included audio CDs containing over two hours of reporters' coverage from the events themselves, narrated by journalist Bill Kurtis. The book is 11x11". Annotation c. by Book News, Inc., Portland, Or. Read Less

Goodreads reviews for We Interrupt This Broadcast: Relive the Events That Stopped Our Lives...from the Hindenburg to the Death of Princess Diana (book with 2 audio CDs)

100 Yards of Glory: The Greatest Moments in NFL History