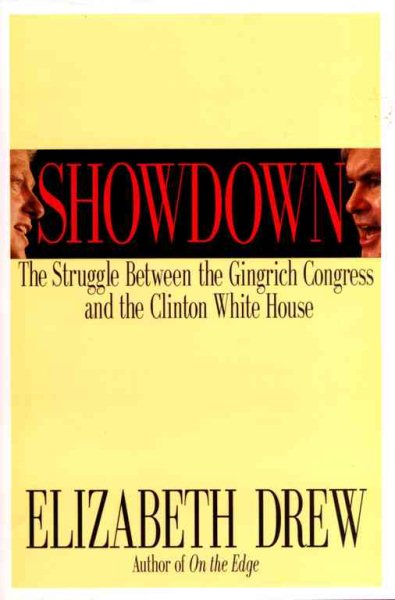 Chronicles the clash between the Clinton White House and the Republican-dominated Congress, focusing on such key people as Dole, Gingrich, and Gramm as they struggle over taxes, welfare, and other issues Read More
Showdown is the story of the most dramatic political rivalry in decades. The Democratic President, brilliant but seen as indecisive and vulnerable, is directly challenged by the equally brilliant new Republican Speaker of the House, who seeks to complete the Reagan Revolution by repealing the Great Society and the New Deal.Drew writes with proven authority and intimate detail of the titanic battle that ensued between the Clinton administration and the Republican Congress - especially between the wavering President and the determined Speaker. Drew's masterly reporting exposes the range of Gingrich's ambition and the way he sought to control the House. She describes Gingrich's complex relationship with Senate Majority Leader Bob Dole, who, no enthusiast, struggled to keep up with Gingrich's revolution, and shows the impact the race for the Republican presidential nomination - in particular, between Dole and Senator Phil Gramm - had on national policy.Through amazingly candid interviews with key congressional figures, Drew elicits exactly how the GOP leadership formed a strategy to roll back the welfare state and destroy the power of the Democratic base. She again takes us behind the scenes to show us what the key players - on both sides - were doing and saying privately as they waged their all-out war. She tells us what the outwardly confident Gingrich worried about. She shows President Clinton trying to regain his footing following the devastating election (a humiliation that he and his wife took much harder than was publicly understood) and turning to a new key adviser, Dick Morris. Drew describes what effect Morris, a former Republican adviser, had on Clinton and the new strains within the White House his arrival caused. She presents a White House more riven than any in memory.Showdown makes clear the enormous stakes of this political struggle - no less than the future direction of the federal government and the fate of programs that affect everyone's life. Read Less

Goodreads reviews for SHOWDOWN: The Struggle Between the Gingrich Congress and the Clinton White House

POETRY A MODERN GUIDE TO ITS UNDERSTANDING