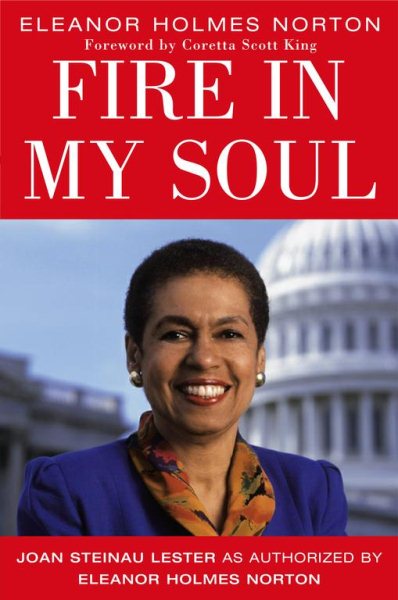 Traces the career of the civil rights crusader and Congressional delegate for Washington, D.C., from her early challenges to her efforts against the Senate and the Supreme Court on such issues as sexual harassment and free speech. Read More
Here is the remarkable story of U.S. Congresswoman Eleanor Holmes Norton -- impassioned civil rights activist, hard-driving legislator, and one of the most powerful women in American history. They call her the "Warrior on the Hill," acknowledging the battles she's waged as a political pioneer across more than four decades of American history. Perhaps more than anyone else, she has taken to heart Eleanor Roosevelt's famous pronouncement that "every political woman needs to develop skin as tough as rhinoceros hide." Joan Steinau Lester shared much of the last forty years with Eleanor Holmes Norton. They met in 1958 when they were both students at Antioch College. Now an acclaimed author, Lester shares her friendship with the congresswoman and tells the story of one woman's rise to leadership. Charting forty years of political and personal challenge, Fire in My Soul shows Norton marching on the Capitol to demand a Senate hearing for Anita Hill; grilling Army generals about sex abuse; arguing before the Supreme Court to uphold first amendment rights, even for a segregationist; and much more. Norton's story is organically linked to Washington, D.C., home to her family for four generations, and reveals why she is now the voice of the city. This fascinating biography, told largely in Norton's words, showcases as never before the many facets of a woman who remains an iconic torch-bearer for the legacy of the Civil Rights Movement. Scores of conversations with Norton and nearly a hundred interviews with colleagues, family, and friends have made Fire in My Soul a remarkable document of how one extraordinary woman helped to effect lasting change in the ways we interact across racial and gender lines. Read Less

Goodreads reviews for Fire in My Soul

Fire in My Soul

The Future of White Men and Other Diversity Dilemmas