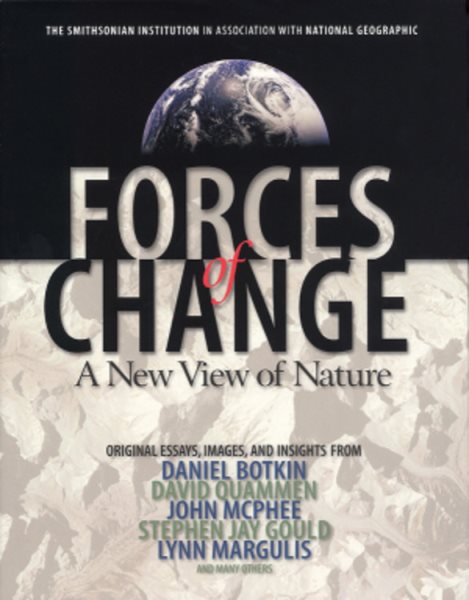 Two eminent scientific organizations team up to explore the dynamic movements within the natural world through stunning photography and unmatched research. Read More
Forces of Change takes readers on an unforgettable tour of truly global proportions. In this single volume, more than 20 of the world's most innovative and visionary scientists, writers, and scholars -- including Stephen Jay Gould, John McPhee, Lynn Margulis, Daniel Botkin, and David Quammen -- illuminate the forces that define and continue to profoundly transform our planet and all of its inhabitants. Taken together, these essays represent a dramatic range of new views and understandings about nature that have emerged over the last century. Developed by the Smithsonian Institution and the National Geographic Society, Forces of Change brings together for the first time the matchless resources of two world-renowned institutions in order to present a bold new vision of the world, which stresses the diversity, interrelatedness, and interdependence of all natural phenomena. In this vision the Earth can be viewed as a grand network of life-supporting forces operating within a single dynamic system. Powerfully punctuated by epic photographs, eloquent illustrations, and a wonderfully dynamic design, Forces of Change is at once highly accessible and deeply thought-provoking. Full of sidebars that lucidly unpack the latest field research, the essays take readers around the world -- from the peaks of the Himalaya to the mysterious depths of the sea, and from the Ladakh cultures of northern India to the A'ani and Assiniboine tribes of Montana. Published in conjunction with a new permanent exhibit program at the Smithsonian's National Museum of Natural History, Forces of Change is a timely and vitally important consideration of science and fate at the dawn of the 21st century. Read Less

Goodreads reviews for Forces of Change: A New View of Nature

Too Much of a Good Thing (The Reverend Curtis Black Series,...