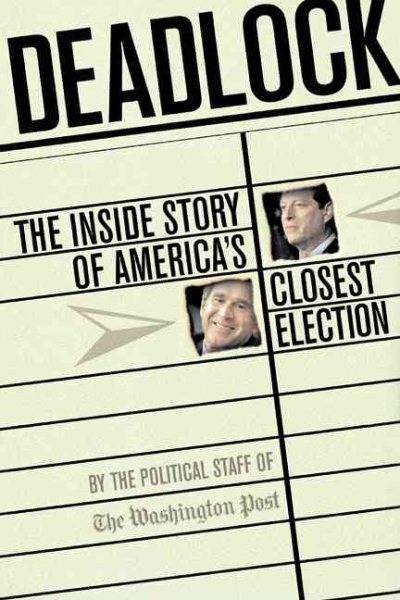 Offers an account of the post-election fight for the White House, including the debate over hanging and pregnant chads, butterfly ballots, manual recounts, and the U.S. Supreme Court's role in the conclusion of the election. Read More
When Americans cast their ballots on November 7, 2000, no one expected that the outcome of the presidential election would still be in doubt more than a month later. For the first time ever, the race for America's highest office had ended in a dead heat, with but a few hundred votes in Florida separating Vice President Al Gore and Governor George W. Bush of Texas. The stage was set for an extraordinary drama of recounts, challenges, court cases - and hanging, swinging, and dimpled chads.Deadlock is the first comprehensive account of what really happened in the "post-election" of 2000, written and reported by the award-winning political staff of The Washington Post, America's premier newspaper for politics and elections. Drawing on hundreds of interviews with the key participants and offering details never before reported by any news organization, the Post staff has produced not just an original work of history-in-the-making, but a page-turner to rival the best political thrillers. Read Less

Goodreads reviews for Deadlock: The Inside Story of America's Closest Election

The Prince of Tennessee: The Rise of Al Gore