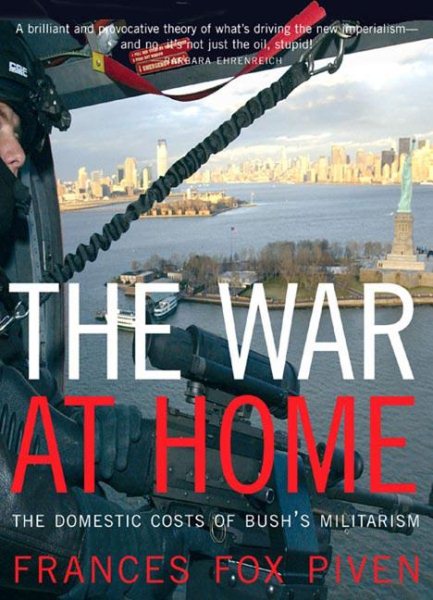 Examining the ways in which the war on terror has been utilized to promote regressive social and economic agendas, an analysis of the current domestic policy reveals taxation and strategic political practices in prior wars while revealing how democracy has been compromised, veteran benefits have been cut, and the wealthy have received disproportionate tax breaks. 15,000 first printing. Read More
The bestselling political thinker analyzes the impact of the Iraq War on domestic policy. The overwhelming attention paid to America's imperial posture overseas has turned our eyes away from a crucial dimension of belligerent foreign policy: the domestic politics of war. Frances Fox Piven, one of the country's most celebrated social scientists, raises questions others have not. She examines the ways the war on terror served to shore up the Bush administration's political base and analyzes the manner in which flag-waving politicians used the emotional fog of war to further their regressive social and economic agendas. In the past, governments tried to reward their citizens for their costly sacrifices in blood and money. During World War II, tax rates on the wealthy rose to 90 percent; toward the end of the Vietnam War, eighteen-year-olds were given the right to vote. In this war, by contrast, democratic rights are being rolled back and taxes on the rich have been slashed. Even veterans' benefits have been sharply reduced. The War at Home makes sense of these developments by putting the current domestic fallout of war in the context of history and by turning an unsentimental eye on the domestic motivations of American militarism. Read Less

Goodreads reviews for The War at Home: The Domestic Costs of Bush's Militarism

Poor People's Movements: Why They Succeed, How They Fail

Why Americans Still Don't Vote: And Why Politicians Want It...