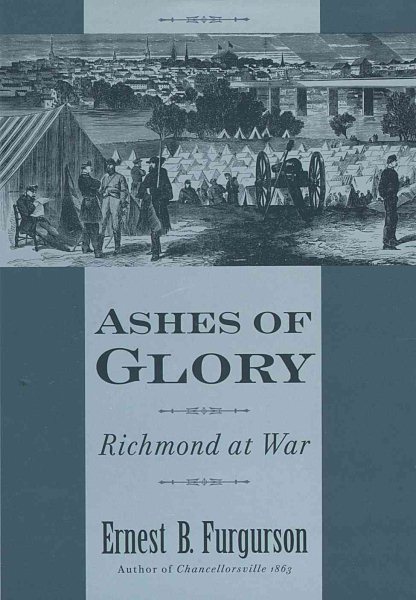 Examines how ordinary citizens of Richmond coped with siege, famine, corruption, and escalating unrest from 1861 to the end of the Civil War Read More
In Ashes of Glory, Ernest B. Furgurson conjures up wartime Richmond in vivid detail. We meet not only with such luminaries as Robert E. Lee, Jefferson Davis, and Stonewall Jackson but with a strikingly broad spectrum of the community: preachers, nurses, newspapermen, bureaucrats, entrepreneurs, slaves, slave dealers, bootleggers, actors, spies, prostitutes, prisoners of war, refugees, handsome widows, eager debutantes, and swarms of enlisted men and officers from all over the South.Furgurson ushers us into the legendary Spotswood Hotel, where generals and gentry communed amid gossip and bourbon. He admits us to the hospitals crammed with amputees and infested by rats. He plunges us into a bread riot involving several hundred citizens and spurred by a "woman huckster." He shows us that, despite universal hardship, Richmond fairly crackled with spirit: theater manager John Hill Hewitt kept melodrama flowing on the city's popular stages; taffy parties, faro parlors, and sewing circles kept various other constituencies entertained; Colonel Thomas E. Rose of Pennsylvania and dozens more tunneled out of notorious Libby Prison; the genteel Union sympathizer Elizabeth Van Lew conducted an elaborate and extraordinarily successful campaign of espionage. Meanwhile, beneath the surface, a compound of defiance, despair, and paranoia preyed on the nerves of everyone from President Davis on down, turning a stunned and battered, once-glamorous society virtually inside out. Read Less

Goodreads reviews for Ashes of Glory: Richmond at War

Chancellorsville 1863: The Souls of the Brave