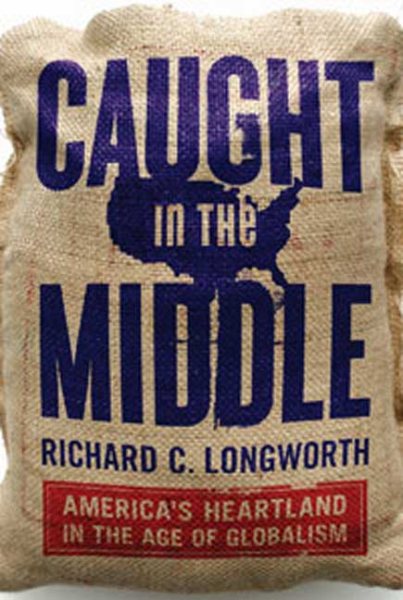 Examines the impact of globalization on the American Midwest, discussing such topics as the plight of immigrant workers, the decline of manufacturing, changes in farming methods, and future economic prospects like the biofuels industry. Read More
A sharp, brilliantly reported look at how globalization is changing America from the inside out. The Midwest has always been the heart of America—both its economic bellwether and the repository of its national identity. Now, in a new, globalized age, the Midwest is challenged as never before. With an influx of immigrant workers and an outpouring of manufacturing jobs, the region that defines the American self— the Lake Wobegon image of solid, hardworking farmers and factory hands—is changing at breakneck speed. As factory farms and global forces displace old ways of life, the United States is being transformed literally from the inside out. In Caught in the Middle, longtime Chicago Tribune reporter Richard C. Longworth explores the new reality of life in today’s heartland and reveals what these changes mean for the region—and the country. Ranging from the manufacturing collapse that has crippled the Midwest to the biofuels revolution that may save it, and from the school districts struggling with new immigrants to the Iowa meatpacking town that can’t survive without them, Longworth addresses what’s right and what’s wrong in the region, and offers a prescription for how it must change—politically as well as economically—if it is to survive and prosper. Read Less

Goodreads reviews for Caught in the Middle: America's Heartland in the Age of Globalism

Hickory Wind: The Life and Times of Gram Parsons

Jocks and Burnouts: Social Categories and Identity in the Hi...