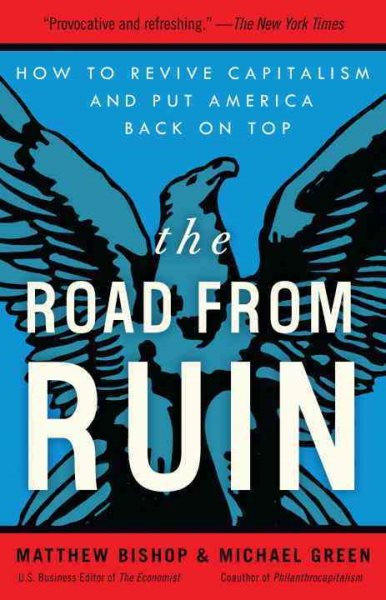 We Have a World-Class Mess . . . Now What?  Amid the carna... Read More
We Have a World-Class Mess . . . Now What?  Amid the carnage of bankruptcies, soaring unemployment, and millions of families losing their homes during the financial crisis of 2007–2009 lay the bloody corpse of a set of ideas that had underpinned the economics of the previous thirty years. A system that had been delivering unprecedented prosperity on a global scale suddenly teetered on the verge of collapse. Capitalism was seemingly exposed as a house of cards. The blame game became a new national pastime as doomsayers predicted the end of America’s leadership of the world economy. We’re at a crossroads, and decisions about how to reshape a discredited capitalism will profoundly affect whether the coming years will be ones of depression, stagnation, or renewed prosperity. Instant analysis since the collapse of the financial system in the fall of 2008 has produced no end of ideas about what to do—ranging from those of free market ideologues (let the market do its work and damn the consequences) to extreme government interventionists determined to keep the animal spirits of capitalism penned up.But if there is anything worse than toxic financial assets it is toxic ideas. We need to reject the old orthodoxies and conventional wisdoms. Matthew Bishop and Michael Green take a step back and analyze what can be learned from financial crises of the past—from the Tulip Craze of the seventeenth century through the Great Depression of the 1930s, Japan’s Great Deflation, and the Long-Term Capital debacle of the 1990s to the unprecedented interventions of the government during the past year—to set the agenda for a reformed twenty-first-century capitalism. The result is an enlightening perspective on what set us on the road to ruin, as well as road signs to guide us back to prosperity.  --Why bubbles are the consequence of financial innovations that generate economic breakthroughs, but why it would be wrong to abandon these inventions of the financial engineers. The Road from Ruin explains how stifling innovation and risk-taking comes at a huge cost to future prosperity.--Why the economy needed a fiscal stimulus to recover from the crisis. Bishop and Green show how economic dogmatists of the Right, who opposed the stimulus, got it wrong, but warn that those on the Left who want the stimulus to run and run could usher in a new era of high inflation.--Why company bosses became too focused on short-term results and did not see the crisis coming. The Road from Ruin shows how we can get business leaders to put the interests of society ahead of their own pay-packets.--The danger of focusing on the financial symptoms of the crisis without tackling the underlying economic causes, such as the world operating on the dollar standard. Bishop and Green show why the role of the dollar as the world’s reserve currency is not just a problem for the rest of the world but for the United States as well. --Why many of capitalism’s champions—especially the advocates of the efficient market hypothesis—lost touch with reality. The Road from Ruin provides insights into new ideas in economics that recognize how the complexity and irrationality of the human beings who make up the economy can be harnessed to build a better capitalism. Remarkably, the issues we face today have presented themselves in one form or another over the past three centuries. Matthew Bishop and Michael Green skillfully draw both the lessons learned and prescriptions for reform to prevent another catastrophic meltdown and put America back on top.From the Hardcover edition. Read Less

Goodreads reviews for The Road from Ruin: How to Revive Capitalism and Put America Back on Top

Philanthrocapitalism: How the Rich Can Save the World

Essential Economics: An A - Z Guide