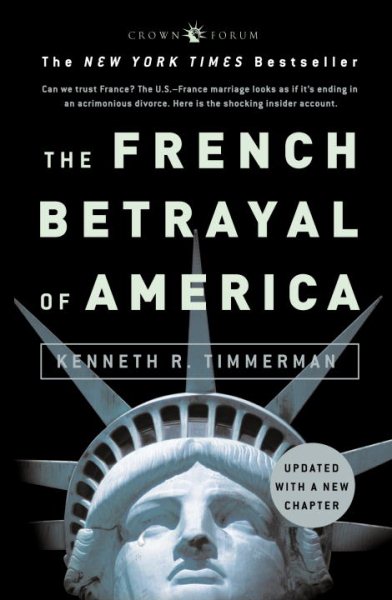 Explores the motivations behind the French government's efforts to undermine American policy toward Iraq, discussing France's support for Saddam Hussein and their secret oil contracts with Iraq worth billions of dollars. Reprint. 30,000 first printing. Read More
In this stunning New York Times bestseller, investigative journalist Kenneth R. Timmerman—who lived and worked in France for nearly two decades—exposes the depth of France’s treachery. Reading this shocking insider account, Americans will see their anger at France turn to sheer outrage. In a brand-new chapter, Timmerman shows how French perfidy continues unabated. The newly updated French Betrayal of America:• Blows the lid off France’s extensive involvement in the UN Oil-for-Food scandal• Reveals damaging new evidence of how the French provided arms and assistance to Saddam’s Iraq right up until the U.S.-led invasion in March 2003• Shows how France continues to do everything in its power to make America fail in Iraq and elsewhere in the Middle East• Exposes France’s hypocrisy: its leaders oppose American “unilateralism” in Iraq even while they pursue their own course to protect a lucrative neocolonial preserve in AfricaRead The French Betrayal of America to find out the unvarnished truth about the supposed ally that the United States should now treat as an enemy. Read Less

Goodreads reviews for The French Betrayal of America