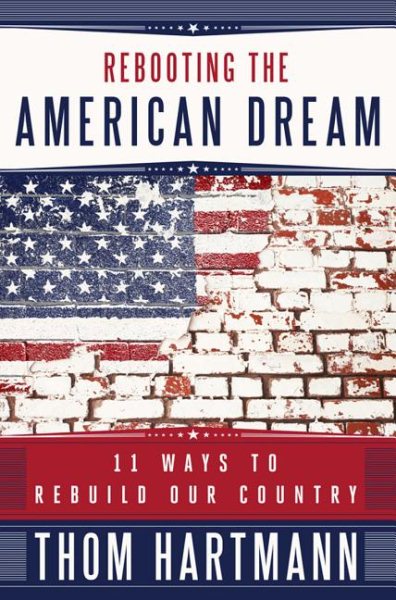 Prominent liberal talk show host and author Thom Hartmann presents eleven ways to return the United States to a more prosperous era. Taking heavy aim at Regan politics, Hartmann, the bestselling author of such titles as Screwed (2006) and Unequal Protection (2004) proposes breaking up the media monopolies, expanding Medicare, rolling back Regan's tax cuts, reigning in corporate control of government, stripping oil of its strategic value, bringing back unions, and rebuilding the social safety net. Alexander Hamilton's 11-point plan for American Manufacturers, which is reprinted in the introduction, served as the inspiration for this work. Annotation ©2011 Book News, Inc., Portland, OR (booknews.com) Read More
In this new work, Thom Hartmann covers 11 straightforward solutions to America's current problems. At the core of each is a call to reclaim economic sovereignty and to wrest control of democracy back from the corporate powers that have hijacked both America and her citizens. What's particularly unique about Hartmann's solutions is that all have been proven to work. Every single one of his 11 steps either was historically part of what built America’s greatness in the past (such as enforcing the Sherman Act and breaking up big corporations or returning to a tariff-based trade policy), or has worked well in other nations (like a national single-payer healthcare system —Medicare Part "E" for "Everybody"—or encouraging the growth of worker-owned cooperatives like the $6 billion Mondragon cooperative in Spain). Hartmann's solutions are essentially nonpartisan. Virtually all have been promoted at one time or another in American history by both political parties, although today most (but not all) fall into the realm of "progressive solutions." Both Ralph Nader and Pat Buchanan will find broad areas of agreement with this book. From addressing the problem of a warming globe to the death of America's middle class to the loss of our essential liberties, Rebooting The American Dream shows how America can reclaim the vision of our Founders and the greatness we held both at home and abroad for over a century.   Read Less

Goodreads reviews for Rebooting the American Dream: 11 Ways to Rebuild Our Country

The Last Hours of Ancient Sunlight: Revised and Updated Thir...

Screwed: The Undeclared War Against the Middle Class -- And...