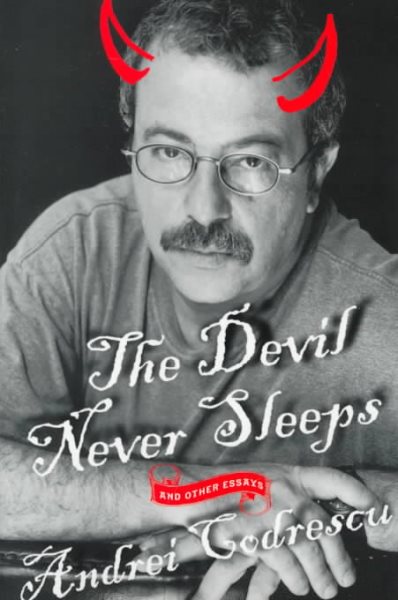 The author comments on the devil, the book of Revelation, the millennium, Elvis, innocence, autobiography, and politics. Read More
The Devil is alive and well and living in America, Andrei Codrescu tells us, and with good reason. Nowhere else in the world--not even in Codrescu's native Transylvania--is he taken quite as seriously. When Codrescu gently derided the fundamentalist Christian belief in Rapture ("a pre-apocalyptic event during which all true believers would be suctioned off to heaven in a single woosh") in one of his commentaries on National Public, NPR received forty thousand letters in a protest spearheaded by Ralph Reed of the Christian Coalition. Codrescu was warned to "stay away from eschatology."Thankfully for us, he hasn't. In The Devil Never Sleeps, one of America's shrewdest social critics sets out to uncover the Devil's most modern and insidiously banal incarnations. Once easily recognizable by his horns, tail, and propensity for plague, today's Devil has become embedded in every fiber of our culture. Discussing everything from rock 'n' roll to William Burroughs to New Orleans bars to the Demon of Prosperity, Codrescu mockingly unmasks Old Nick as the opportunistic technocrat he really is. Embracing cell phones, cable access, and cyberspace, the ubiquitous Devil of secular culture embodies the true evil facing us today--banality.In a world teeming with distractions, we are still more than capable of being bored to death. Tormented as much by insomnia and its ravages as the Devil (perhaps they are one and the same), we've become as twenty-four-hour society, swinging desperately between tedium and terror and sleeping fitfully, if at all. As Codrescu points out, the Devil never sleeps because we just won't let him.With his characteristic charm and playful exuberance, Andrei Codrescu has successfully teased the Devil out from the darkest recesses and comic excesses of the human experience. The Devil Never Sleeps is his most wonderfully perverse book yet. Read Less

Goodreads reviews for The Devil Never Sleeps: and Other Essays

Road Scholar: Coast To Coast Late in the Century

Road Scholar: Coast to Coast Late in the Century