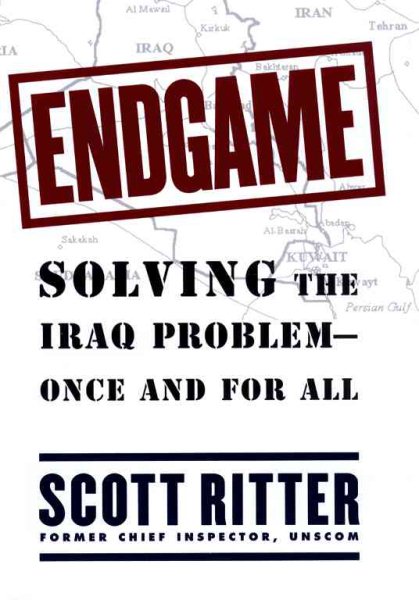 A former chief weapons inspector for the U.N. describes what Iraq is like today, explains how the inspections are carried out, and suggests ways to make our foreign policy towards Iraq more effective Read More
The resignation of Scott Ritter as chief weapons inspector for UNSCOM in August 1998 made front-page news around the world. Now Scott Ritter draws on his seven years' experience hunting Saddam's weapons of mass destruction to take readers inside Iraq and show that country as it has never been seen by outsiders before. In Endgame, he dissects the failure of U.S. policy in Iraq and reveals a bold new approach to ending the ongoing Iraq crisis. Ritter describes Saddam Hussein's rise to power, painting a damning portrait of a dictator who ruthlessly eliminated rivals as he fought his way to the top. Ritter explains how Saddam cleverly drew on tribal and family connections to consolidate power and then outmaneuver and often execute opponents. Once he had become the uncontested strongman in Iraq, Saddam began planning the domination of the Persian Gulf region, fighting a war with Iran, threatening Israel, and finally invading Kuwait, the action that provoked the Gulf War. Along the way Saddam repeatedly purged Iraq's military, putting his own key allies and relatives in charge. He also discovered the value of chemical weapons and ballistic missiles, which he used to turn the tide in the war against Iran. When the U.N. Security Council authorized inspections of Iraq's chemical, biological, and nuclear weapons facilities following the conclusion of the Gulf War, Saddam put in place a concealment program designed to preserve his weapons capabilities. It was this concealment mechanism that UNSCOM spent seven years trying to penetrate in its search for Iraq's weapons of mass destruction. Ritter takes us with him inside some of Iraq's most carefully guarded sites as he describes what it was like to conduct these inspections. He tells stories of dramatic face-offs by unarmed inspectors with hostile Iraqi guards and officials. Endgame criticizes current U.S. policy toward Iraq, pointing out that we have squandered an international consensus and now find ourselves virtually isolated over our Iraq policy. Scott Ritter offers a way out of the Iraqi morass, proposing a bold and innovative solution to the current crisis. He argues that the U.S. should again take a leadership position on Iraq if we are to avoid facing a re-armed and emboldened Saddam on another battlefield in the future. Read Less

Goodreads reviews for Endgame : Solving the Iraq Problem -- Once and For All

Iraq Confidential: The Untold Story of the Intelligence Cons...

Iraq Confidential: The Untold Story of the Intelligence Cons...

War on Iraq: What Team Bush Doesn't Want You To Know