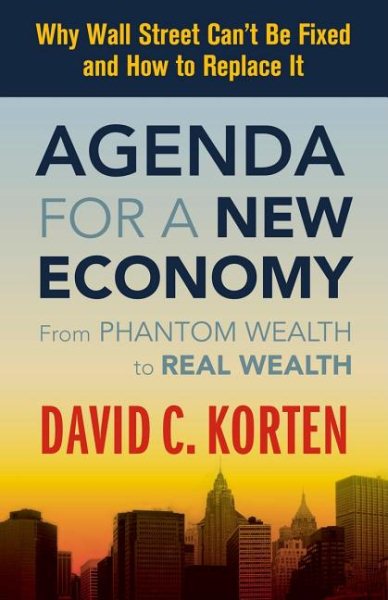 Today's economic crisis is the worst since the Great Depression. However, as David Korten shows, the steps being taken to address it do nothing to deal with the reality of a failed economic system. Korten identifies the deeper sources: Wall Street institutions that have perfected the art of creating "wealth" without producing anything of real value: phantom wealth. Our hope lies not with Wall Street, Korten argues, but with Main Street, which creates real wealth from real resources to meet real needs. Heoutlines an agenda to create a new economy--locally based, community oriented, and devoted to creating a better life for all, not simply increasing profits. It will require changes to how we measure economic success, organize our financial system, even the very way we create money.--From publisher description. Read More
Nearly two years after the economic meltdown, joblessness and foreclosures are still endemic, Wall Street executives are once again getting massive bonuses, and our leaders in Washington lack the will to make desperately needed fundamental changes to the economy. Change will have to come from below. Agenda for a New Economy is the handbook for that revolution. In this revised and updated edition David Korten has fleshed out his vision of the alternative to the corporate Wall Street economy: a Main Street economy based on locally owned, community-oriented “living enterprises” whose success is measured as much by their positive impact on people and the environment as by their positive balance sheet. We will lose nothing in the process because, as Korten ably demonstrates, the supposed services Wall Street offers are simply a con game. And Korten now offers more in-depth advice on how to mount a grassroots campaign to bring about an economy based on shared prosperity, ecological stewardship, and citizen democracy. Read Less

Goodreads reviews for Agenda for a New Economy: From Phantom Wealth to Real Wealth

When Corporations Rule the World