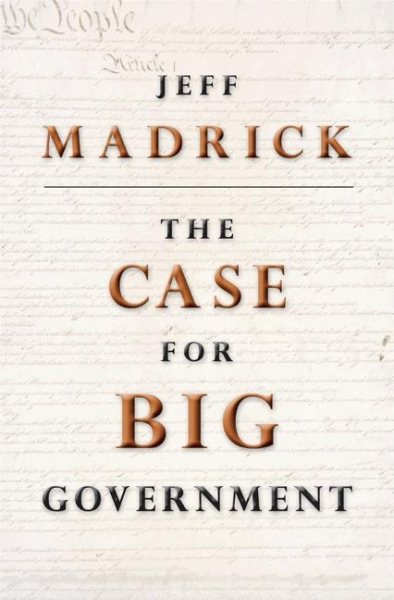 Political conservatives have long believed that the best government is a small government. But if... Read More
Political conservatives have long believed that the best government is a small government. But if this were true, noted economist Jeff Madrick argues, the nation would not be experiencing stagnant wages, rising health care costs, increasing unemployment, and concentrations of wealth for a narrow elite. In this perceptive and eye-opening book, Madrick proves that an engaged government--a big government of high taxes and wise regulations--is necessary for the social and economic answers that Americans desperately need in changing times. He shows that the big governments of past eras fostered greatness and prosperity, while weak, laissez-faire governments marked periods of corruption and exploitation. The Case for Big Government considers whether the government can adjust its current policies and set the country right.Madrick explains why politics and economics should go hand in hand; why America benefits when the government actively nourishes economic growth; and why America must reject free market orthodoxy and adopt ambitious government-centered programs. He looks critically at today's politicians--at Republicans seeking to revive nineteenth-century principles, and at Democrats who are abandoning the pioneering efforts of the Great Society. Madrick paints a devastating portrait of the nation’s declining social opportunities and how the economy has failed its workers. He demonstrates that the government must correct itself to address these serious issues.A practical call to arms, The Case for Big Government asks for innovation, experimentation, and a willingness to fail. The book sets aside ideology and proposes bold steps to ensure the nation’s vitality. Read Less

Goodreads reviews for The Case for Big Government (The Public Square)

Age of Greed: The Triumph of Finance and the Decline of Amer...

The Case for Big Government (The Public Square)