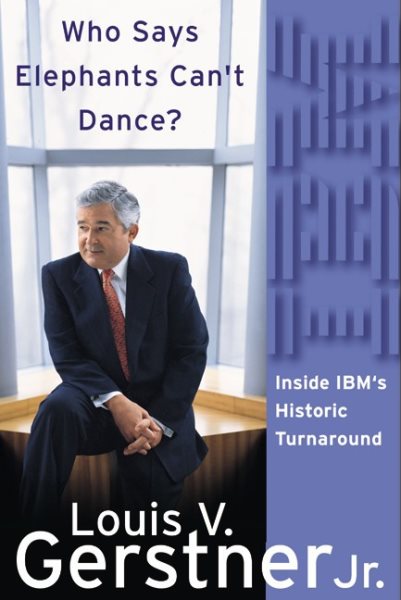 The chairman and former CEO of IBM recounts his years at Big Blue, detailing how, under his leadership, IBM was transformed from a company on the verge of collapse into one of today's most preeminent global corporations. Read More
In 1990, IBM had its most profitable year ever. By 1993, the computer industry had changed so rapidly the company was on its way to losing $16 billion and IBM was on a watch list for extinction -- victimized by its own lumbering size, an insular corporate culture, and the PC era IBM had itself helped invent.Then Lou Gerstner was brought in to run IBM. Almost everyone watching the rapid demise of this American icon presumed Gerstner had joined IBM to preside over its continued dissolution into a confederation of autonomous business units. This strategy, well underway when he arrived, would have effectively eliminated the corporation that had invented many of the industry's most important technologies.Instead, Gerstner took hold of the company and demanded the managers work together to re-establish IBM's mission as a customer-focused provider of computing solutions. Moving ahead of his critics, Gerstner made the hold decision to keep the company together, slash prices on his core product to keep the company competitive, and almost defiantly announced, "The last thing IBM needs right now is a vision."Who Says Elephants Can't Dance? tells the story of IBM's competitive and cultural transformation. In his own words, Gerstner offers a blow-by-blow account of his arrival at the company and his campaign to rebuild the leadership team and give the workforce a renewed sense of purpose. In the process, Gerstner defined a strategy for the computing giant and remade the ossified culture bred by the company's own success.The first-hand story of an extraordinary turnaround, a unique case study in managing a crisis, and a thoughtful reflection on the computer industry and the principles of leadership, Who Says Elephants Can't Dance? sums up Lou Gerstner's historic business achievement. Taking readers deep into the world of IBM's CEO, Gerstner recounts the high-level meetings and explains the pressure-filled, no-turning-back decisions that had to be made. He also offers his hard-won conclusions about the essence of what makes a great company run.In the history of modern business, many companies have gone from being industry leaders to the verge of extinction. Through the heroic efforts of a new management team, some of those companies have even succeeded in resuscitating themselves and living on in the shadow of their former stature. But only one company has been at the pinnacle of an industry, fallen to near collapse, and then, beyond anyone's expectations, returned to set the agenda. That company is IBM.Lou Gerstener, Jr., served as chairman and chief executive officer of IBM from April 1993 to March 2002, when he retired as CEO. He remained chairman of the board through the end of 2002. Before joining IBM, Mr. Gerstner served for four years as chairman and CEO of RJR Nabisco, Inc. This was preceded by an eleven-year career at the American Express Company, where he was president of the parent company and chairman and CEO of its largest subsidiary. Prior to that, Mr. Gerstner was a director of the management consulting firm of McKinsey & Co., Inc. He received a bachelor's degree in engineering from Dartmouth College and an MBA from Harvard Business School. Read Less

A Son of Thunder: Patrick Henry and the American Republic