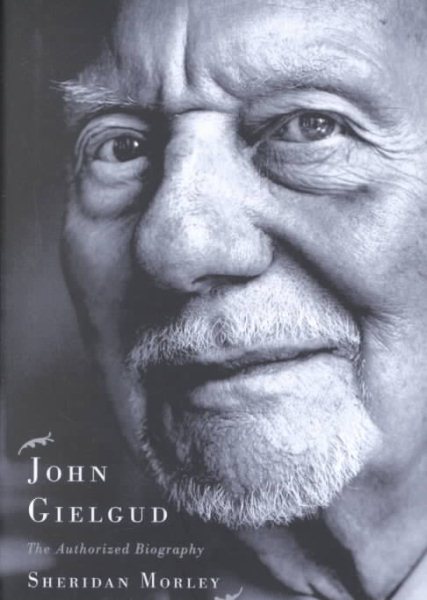 Drawn from letters, diaries, personal files, and interviews, a fascinating glimpse into the life of the late actor, who was one of the best Shakespearean actors ever and a vital part of the golden age of theater in England, details his childhood, his family background, his extraordinary rise to success, his Academy Award-winning performance in Arthur, his personal relationships, and his many trials and tribulations. 50,000 first printing. Read More
Sir John Gielgud's career as an actor was perhaps the most distinguished of any of his generation, and, in a lifetime that spanned almost a century, he appeared in hundreds of theatrical productions and films, receiving virtually every honor given, including an Academy Award. Now, in this wonderfully insightful biography, fully authorized and written with first-ever access to Gielgud's personal letters and diaries, bestselling biographer Sheridan Morley not only traces the actor's fascinating career, but provides a fresh and remarkably frank look into John Gielgud the man, showing how his success as an actor in many ways came at the expense of his personal happiness. Born into a theatrical family, John Gielgud took to the stage as naturally as a duck to water, and almost from the beginning, those who saw him perform knew that they were experiencing something extraordinary. A determined actor, intent on learning and polishing his craft, he worked incessantly, taking on one role after another, the greater the challenge, the better. During his long and remarkable career, he took on every truly great and demanding role, including all of Shakespeare's major plays as well as many contemporary and experimental productions. At ease in both great drama and light comedy, he was blessed with a great range and a seemingly infinite capacity to inhabit whatever character he attempted. Basically a somewhat shy man offstage, however, Gielgud for the most part limited his friendships to those with whom he worked, and as a result the theater -- and later, film -- made up just about his entire life. That he was flesh and blood, however, was reflected in the fact that he did enter into two long-term relationships, the first with a man who eventually left him for another, but with whom Gielgud maintained a strong tie, and the second with a handsome, mysterious Hungarian who lived with him until he died, just a few months before Sir John. True scandal came into Gielgud's life only once. In 1953, just weeks after Gielgud had been knighted by the Queen, he was arrested in a public men's room and charged with solicitation. The British press had a field day, but Gielgud's friends and fellow actors rallied to his support, as did his thousands of fans, and the result was the eventual change of law in England regarding sex between consenting adults. While these and many other aspects of his personal life are discussed for the first time in this distinguished biography, it is Gielgud's career as an actor, of course, that receives the greatest attention. And while British audiences had the pleasure of seeing him perform in the theater for his entire life, Americans came to know him best for his work in the movies, and most especially for his Oscar-winning performance as Hobson the butler in the Dudley Moore film Arthur. As dramatic and captivating as one of Sir John's many performances, this authorized biography is an intimate and fully rounded portrait of an unforgettable actor and a remarkable man. Read Less

Judy Garland: Beyond the Rainbow