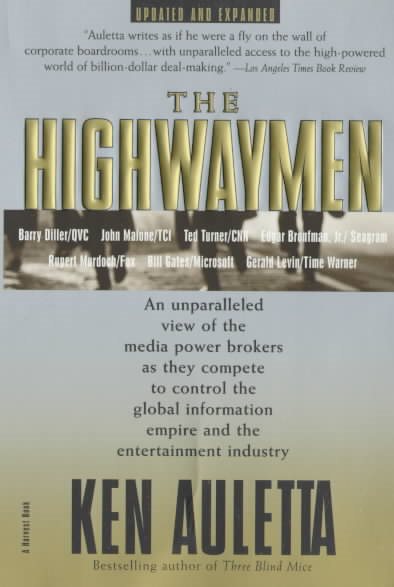 Profiles the careers and influence of corporate titans Bill Gates, Ted Turner, Michael Eisner, Rupert Murdoch, and others of influence in the exploding information industry Read More
A titanic struggle is taking place - not just among corporate titans, but among entire industries across the globe. At stake is control of the world's fastest-growing industry: communications. The contestants are the huge Hollywood studios, the television networks, and telephone, publishing, and computer companies. The prize is not only vast wealth, but a virtual lock on the dissemination of information worldwide. The Highwaymen is a riveting and compelling look behind the scenes at the vanities and visions of such chief players as Rupert Murdoch, Ted Turner, Time Warner, Disney, Viacom, and Microsoft. An astounding tale of greed, enterprise, and corporate achievement, The Highwaymen is an account of the explosive landscape of telecommunications, and as such provides an indispensable guide to today's world. Read Less

Goodreads reviews for The Highwaymen

Frenemies: The Epic Disruption of the Ad Business (and Every...

Greed and Glory on Wall Street: The Fall of the House of Leh...

Greed and Glory on Wall Street: The Fall of the House of Leh...