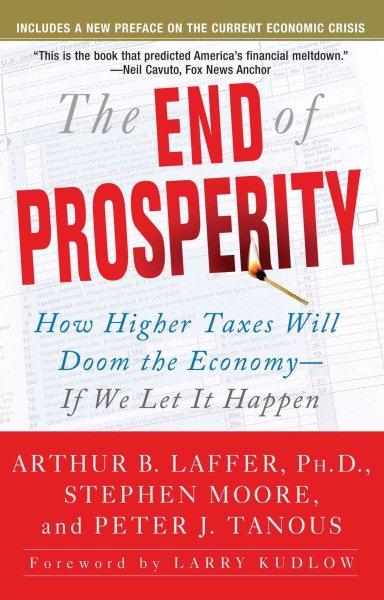 Makes cautionary predictions about the consequences of higher taxes that may be imposed by a Democratic president, in an account that considers the downside of reversed Reaganomics pro-growth policies as envisioned by such political leaders as Hillary Clinton, Barack Obama, and Nancy Pelosi. 75,000 first printing. Read More
Now available in paperback with a new updated chapter, this timely book by three distinguished economists delivers an urgent message: Americans risk losing their high standard of living if the pro-growth policies of the last twenty-five years are reversed by a new president. Since the early 1980s, the United States has experienced a wave of prosperity almost unprecedented in history in terms of wealth creation, new jobs, and improved living standards for all. Under the leadership of Presidents Ronald Reagan and Bill Clinton, Americans changed the incentive structure on taxes, inflation, and regulation, and as a result the economy roared back to life after the anti-growth, high-inflation 1970s. Now, America is moving away from these growth policies and putting its prosperity at risk. Laffer, Moore, and Tanous provide the factual information every American needs in order to understand exactly how we achieved the prosperity many people have come to take for granted, and explain how the policies of Democrats Barack Obama, Hillary Clinton, and Nancy Pelosi can cause America to lose its status as the world growth and job creation machine. This book is essential reading for all Americans who value our nation’s free enterprise system and want to know how to protect their own investments in the coming storm. Read Less

Goodreads reviews for The End of Prosperity: How Higher Taxes Will Doom the Economy--If We Let It Happen

Trumponomics: Inside the America First Plan to Revive Our Ec...

Return to Prosperity: How America Can Regain Its Economic Su...

By Laffer, Arthur B.

An Inquiry into the Nature and Causes of the Wealth of State...