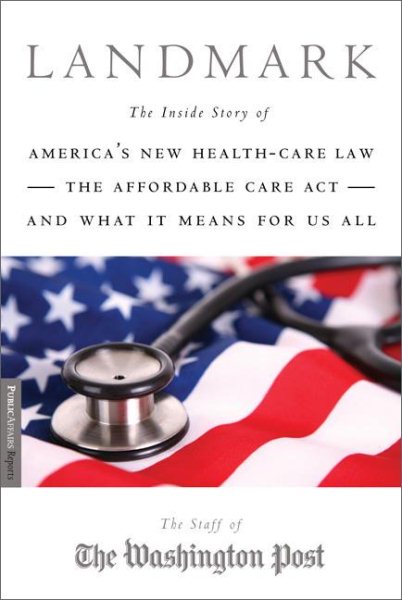 Presents an introduction to the federal health care law passed in March, 2010, explaining the provisions of the legislation and discussing its implications for consumers, employers, insurers, and the medical establishment. Read More
The Washington Post’s must-read guide to the health care overhaul What now? Despite the rancorous, divisive, year-long debate in Washington, many Americans still don’t understand what the historic overhaul of the health care system will—or won’t—mean. In Landmark, the national reporting staff of The Washington Post pierces through the confusion, examining the new law’s likely impact on us all: our families, doctors, hospitals, health care providers, insurers, and other parts of a health care system that has grown to occupy one-sixth of the U.S. economy.Landmark’s behind-the-scenes narrative reveals how just how close the law came to defeat, as well as the compromises and deals that President Obama and his Democratic majority in Congress made in achieving what has eluded their predecessors for the past seventy-five years: A legislative package that expands and transforms American health care coverage.Landmark is an invaluable resource for anyone eager to understand the changes coming our way. Read Less

Goodreads reviews for Landmark: The Inside Story of America’s New Health-Care Law-The Affordable Care Act-and What It Means for Us All (Publicaffairs Reports)

Donald Trump and His Assault on Truth: The President's False...

Fight to the Finish: How the Washington Nationals Rallied to...