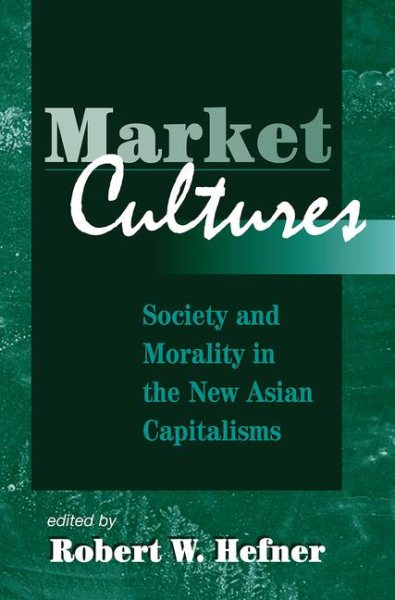 Market Cultures examines the spectacular growth of capitalist enterprise among overseas Chinese and Southeast Asians. It does so, not through formal models, but by way of the varied cultures and organizations in which Asian capitalism is embedded. Eschewing talk of a uniform Asian ?miracle,” the book shows that there existed complex precedents for and against market capitalism in East and Southeast Asia, precedents that reflected subcultural heritages of religion, ethnicity, gender, and class. The case studies illuminate a cultural variety unacknowledged in most analyses of modern capitalism but vitally important for anyone wishing to understand one of the great economic transformations of our time. Read More
One of the most remarkable developments of our time has been the spectacular growth of capitalist enterprise among overseas Chinese and Southeast Asians. Market Cultures examines this event, not in terms of formal models and faceless abstractions, but in light of the institutions through which local people give meaning and moral value to business enterprise. The chapters show that some Chinese and Southeast Asians have welcomed new forms of enterprise and consumption, but others regard both with strong ethical reservations. Eschewing talk of a uniform Asian ?miracle,? this volume argues that Chinese and Southeast Asian societies had cultural precedents for and against market capitalism, reflecting subcultural heritages of religion, ethnicity, gender, and class.The case studies illustrate the deeply embedded nature of market institutions and reveal a moral and organizational variety unacknowledged in most analysis of modern capitalism. Rather than a unitary Confucian perspective on capitalism, contributors show that modern Chinese tradition has been interpreted in strikingly different ways by men and women, elites and masses, the wealthy and the poor. Avoiding stereotypes of ?Asian values,? the volume's essays on Vietnam, the Philippines, Malaysia, Indonesia, and Singapore portray local worlds deeply?but differentially?engaged with market capitalism.Addressing one of the great social transformations of our time, Market Cultures will be of interest to anthropologists, sociologists, political economists, and students of Asian history and culture, as well as those concerned with the economic ascent of modern Asia and its implications for our world. Read Less

Goodreads reviews for Market Cultures: Society And Morality In The New Asian Capitalisms

By Arthur I., Allegra Ingleright and Celeste Comegys Peardon Gates

Governing by Network: The New Shape of the Public Sector

A Children's Book About: Being Greedy (Help Me Be Good)