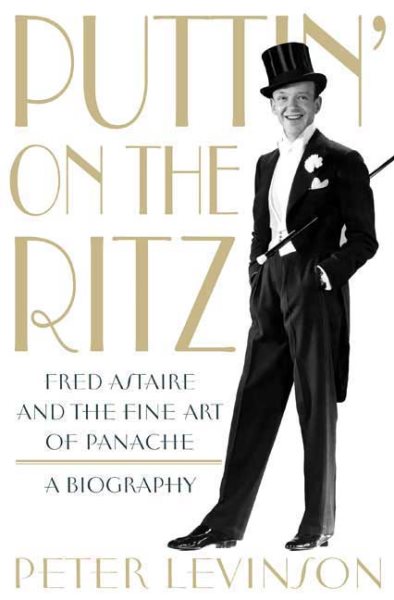 Traces the rise of the iconic Hollywood dancer from his youth in an Austrian-Jewish Nebraska community to the star of such classics as "Swing Time" and "The Bandwagon," in an account that includes coverage of such topics as his friendship with the Gershwins, his partnerships with such stars as Ginger Rogers and Rita Hayworth, and his history-making appearance in 1958's "An Evening with Fred Astaire." Read More
Fred Astaire defined elegance on the dance floor. With white tie, tails and a succession of elegant partners - Ginger Rogers, Cyd Charisse, Rita Hayworth, Eleanor Powell, Judy Garland and others - he created an indelible image of the Anglo bon vivant. His origins, though, were far more humble: Born in Omaha, Nebraska, Fred Astaire came from Midwestern stock that partially had its origin in the late nineteenth century Jewish communities of Austria. At first, he played second fiddle in vaudeville to his sister, Adele; however, once he learned how to tap and bought his first Brooks Brothers suit, the game changed. How did he transform himself from a small town Nebraska boy into the most sophisticated man ever to dance across a dance floor? In this comprehensive new book about the life and artistry of Fred Astaire, Peter Levinson looks carefully at the entirety of Astaire's career from vaudeville to Broadway to Hollywood to television. He explores Astaire’s relationships with his vivacious dance partners, his friendship with songwriters like George Gershwin and Irving Berlin and his relationship with choreographers like Hermes Pan to discover how Astaire, in effect, created his elegant persona. Astaire put his mark on the Hollywood musical, starting his career at RKO and then moving to MGM. From his long list of films, certain classics like "Swing Time", "Top Hat", “Royal Wedding” and "The Bandwagon" revolutionized the presentation of dance on film; but, he also revolutionized the television variety special with the Emmy-Award-Winning “An Evening With Fred Astaire”. For ‘Puttin’ on the Ritz”, veteran Hollywood insider, Peter Levinson interviewed over two hundred people who worked closely with Astaire such as Debbie Reynolds, Dick Van Dyke, Artie Shaw, Bobby Short, Oscar Peterson, Mel Ferrer, Betty Garrett, Joel Grey, Arlene Dahl, Michael Kidd, Betty Comden, Onna White, Margaret Whiting, Andy Williams, and others like Quincy Jones, John Travolta, and John Williams, to provide an intimate window on to his professional as well as his personal life. His new biography of Astaire is a celebration of the great era of sophistication on Broadway and in Hollywood as seen through the life of a man who learned how to put on the Ritz and become America’s premiere song-and-dance-man: Fred Astaire. Read Less

Goodreads reviews for Puttin' On the Ritz: Fred Astaire and the Fine Art of Panache, A Biography

Tommy Dorsey: Livin' in a Great Big Way, A Biography

September in the Rain: The Life of Nelson Riddle (LIVRE SUR...