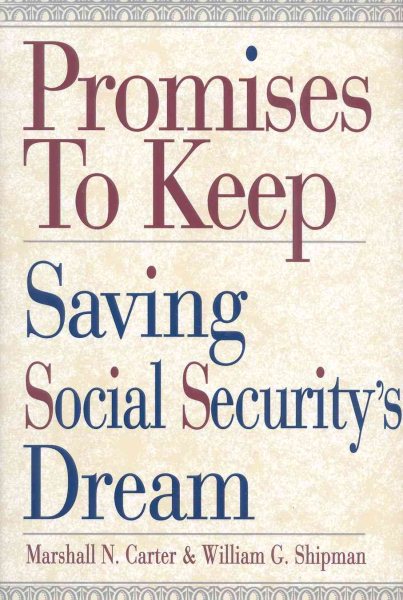 Argues that the ailing Social Security system can be gradually replaced while fully guaranteeing benefits to all Americans Read More
Carter and Shipman - who have spent their careers building retirement investments for individuals, institutions, and nations - show how we can gradually replace the Social Security system while fully guaranteeing full benefits to all Americans. Their solution would allow people the freedom to invest their FICA taxes in financial assets that more than meet retirement needs at a fraction of Social Security's cost.Under their plan, financial security for all retirees would be more certain, worker's taxes would be cut, and the nation's staggering unfunded Social Security liability would drop by 60 percent. Disability and hospital insurance would continue as they are - neither would be altered even slightly.Promises to Keep is not a doomsday book. Nor is it a jargon-filled economics text. Rather, it is a book that points to a secure future for all Americans. Read Less

Danger in the Comfort Zone: From Boardroom to Mailroom -- Ho...

What Matters Most: Four Absolute Necessities in Following Ch...