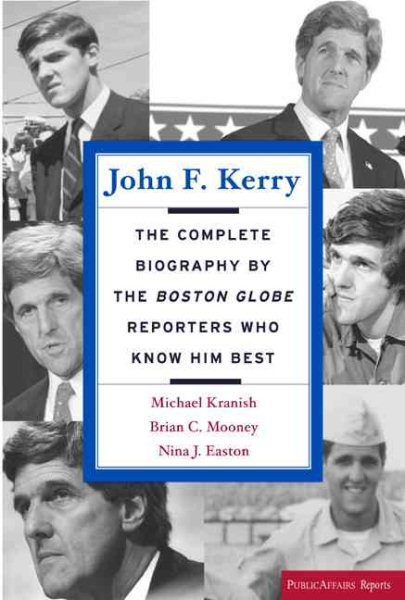 Looks at the life of Senator John Kerry, covering his background, military service, his political career, and his presidential campaign. Read More
On Jan. 27, 2004, Senator John F. Kerry of Massachusetts accomplished one of the most spectacular turnarounds in modern American politics when he capped a surprise win in the Iowa caucus with a victory in the New Hampshire primary. The 2004 Democratic presidential nomination is now (in the words of Robert Novak) "John Kerry's to lose." Who is the man leading in the race to become the Democratic Party's nominee for president in 2004? And what kind of political leader is he?The outlines of John Kerry's life are familiar: A decorated Vietnam veteran who became an influential, if unlikely, anti-war protester. A lanky 60-year-old who quenches his thirst for danger with high-speed kiteboarding, windsurfing, piloting, motorcycling, and, in some cases, driving. A senator with a reputation as an investigator and foreign policy expert. A man married to one of the richest women in America. But beyond this broad picture, Kerry is something of a mystery to the public, largely because of a complex yet riveting personal and professional history outlined in this book.John F. Kerry: The Complete Biography, the first full and in-depth book about the candidate's life, is based on a highly regarded series on Kerry published in the Boston Globe, plus years of additional reporting. It will explore his background, his service in the military (including significant experiences omitted from Douglas Brinkley's bestselling Tour of Duty), his early legal and political career, his legislative record and the remarkable turnaround in his political fortunes during the 2004 election cycle. This incisive, frank look at Kerry's life, and at his strengths and liabilities, is important reading for anyone interested in the presidential campaign. Read Less

Goodreads reviews for John F. Kerry: The Complete Biography By The Boston Globe Reporters Who Know Him Best (Publicaffairs Reports)

The World's Fastest Man: The Extraordinary Life of Cyclist M...

Trump Revealed: The Definitive Biography of the 45th Preside...