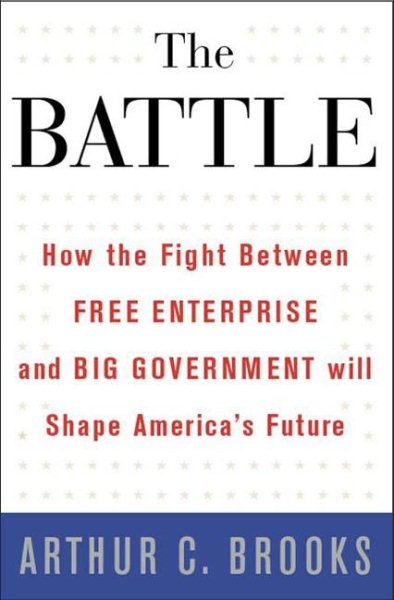 The battle is on between the forces of social democracy and America’s great tradition of free enterprise?and the stakes couldn’t be higher Read More
"This is the playbook for the resurgence of the free enterprise movement."-Richard B. Cheney"What makes The Battle so important is its unique combination of intellectual clarity and the best succinct analysis of the values of the American people I have ever read....Arthur C. Brooks has written a book that will take its place with Charles Murray's Losing Ground as one of the pivotal books around which American history turned."-Newt Gingrich (from the foreword)"Arthur Brooks is one of America's most astute, bold, and iconoclastic thinkers. The Battle provides yet more evidence of that fact. Loaded with fresh data and common sense, The Battle uncovers liberalism's true grand agenda---to change America's culture and the American way---and explains how Americans can fight back and ultimately win."-William J. Bennett"Economic issues are not just about money. They're about how we live. The Battle shows how Washington power-grabbers use financial fears to tell the rest of us how we must live. Crucially, The Battle teaches us how to fight back."-Marvin Olasky, editor-in-chief, World Magazine, and Provost, The King's College Read Less

Goodreads reviews for The Battle: How the Fight between Free Enterprise and Big Government Will Shape Americas Future

Love Your Enemies: How Decent People Can Save America from t...

The Conservative Heart: How to Build a Fairer, Happier, and...