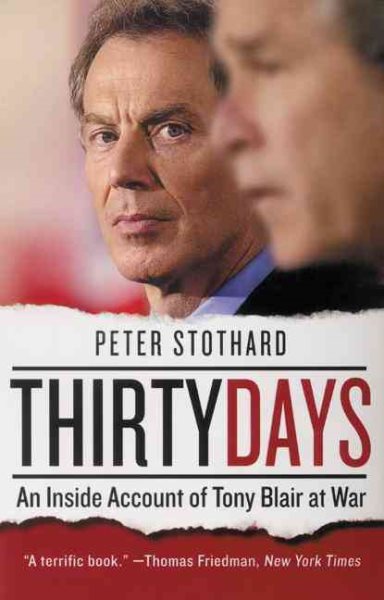 Recounts how, during four weeks in March and April 2003, British Prime Minister Tony Blair convinced his party and constituency to support a joint Anglo-American invasion of Iraq. Reprint. 40,000 first printing. Read More
For thirty days I was close by him at historic events -- in the places where writers never are.Before Britain could help the United States in the war against Saddam Hussein, Tony Blair faced a battle against his own voters, his own party, and his own allies in Europe. These were among the most tense and tumultuous weeks the world had seen since the fall of the Berlin Wall.In thirty days, Blair took on his opponents and won.Through it all, Peter Stothard had unprecedented access to Blair -- from Ten Downing Street and the House of Commons through the war summits in the Azores, Brussels, Belfast, and at Camp David. Stothard brings us inside the corridors of power during this extraordinary time, offering a vivid, up-close view of an enormously popular leader facing the challenge of his life. Read Less

Goodreads reviews for Thirty Days: An Inside Account of Tony Blair at War

Thirty Days: Tony Blair and the Test of History

Alexandria: The Last Nights of Cleopatra

Children: The Challenge : The Classic Work on Improving Pare...