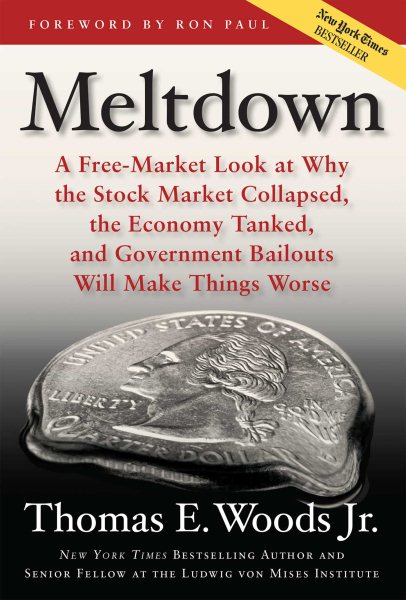 Discusses the economic crisis, claiming that government regulation and manipulation caused the financial downturn in real estate and that further regulation and government bailouts will make the situation worse. Read More
If you are fed up with Washington boondoggles, and you like the small-government, politically-incorrect thinking of Ron Paul, then you'll love Tom Woods's Meltdown. In clear, no-nonsense terms, Woods explains what led up to this economic crisis, who's really to blame, and why government bailouts won't work. Woods will reveal:* Which brave few economists predicted the economic fallout--and why nobody listened* What really caused the collapse* Why the Fed--not taxpayers--should have to answer for the current economic crisis* Why bailouts are band-aids that will only provide temporary relief and ultimately make things worse* What we should do instead, to put our economy on a healthy path to recoveryWith a foreword from Ron Paul, Meltdown is the free-market answer to the Fed-created economic crisis. As the new Obama administration inevitably calls for more regulations, Woods argues that the only way to rebuild our economy is by returning to the fundamentals of capitalism and letting the free market work Read Less

Goodreads reviews for Meltdown: A Free-Market Look at Why the Stock Market Collapsed, the Economy Tanked, and Government Bailouts Will Make Things Worse

33 Questions About American History You're Not Supposed to A...

Nullification: How to Resist Federal Tyranny in the 21st Cen...