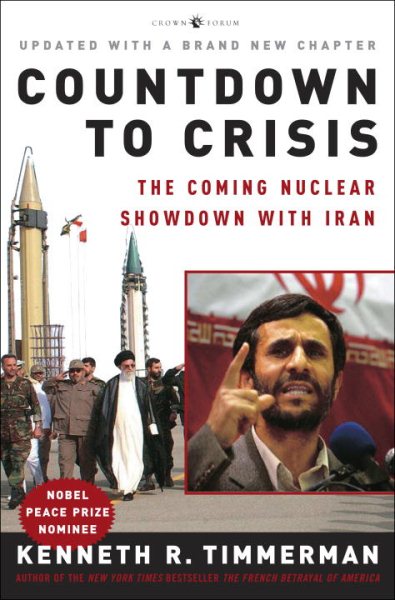 The author of The French Betrayal of America offers a chilling look at the growing national security threat involving the nuclear capabilities of Iran, providing a revealing exposé of the intelligence blunders and foreign policy decisions that have increased the threat, as well as the complicity of Iran in the September 11th attack. Reprint. 15,000 first printing. Read More
From the nomination for the Nobel Peace Prize 2006:“The most urgent and disastrous threat to world peace today is the looming danger that Iran will produce nuclear weapons. . . . Kenneth R. Timmerman, a U.S. expert on Iran, has for more than twenty years exposed Iran’s nuclear activities and intentions. . . . Despite the illusions of many in positions of power, he has been right, again and again. His latest book, Countdown to Crisis: The Coming Nuclear Showdown with Iran, lays out this ongoing scandal in chilling detail.” —Per Ahlmark, former Deputy Prime Minister of Sweden, nominating Timmerman for the Nobel Peace Prize IRAN: THE REAL ENEMYWho is the greatest threat to America? The Islamic Republic of Iran. In his chilling new book, New York Times bestselling author Kenneth R. Timmerman uses his exclusive access to previously classified documents, Iranian defectors and officials, and high-level intelligence sources to lay bare the true nature of the Iranian threat—and America’s failure to deal with the danger. Crisscrossing the globe, Timmerman takes readers into secret terrorist gatherings in Tehran, tense meetings in the White House, debriefings at an obscure CIA outpost in Azerbaijan, diplomatic face-offs in the Kremlin, and many other dangerous spots to get the complete story on Iran’s radical Islamic regime.And in a brand-new chapter for the paperback edition, Timmerman reveals that it may already be too late to stop the Iranian regime. For Americans interested in the truth about Iran, Countdown to Crisis may amount to a call for action—or even a case for war. Read Less

Goodreads reviews for Countdown to Crisis: The Coming Nuclear Showdown with Iran