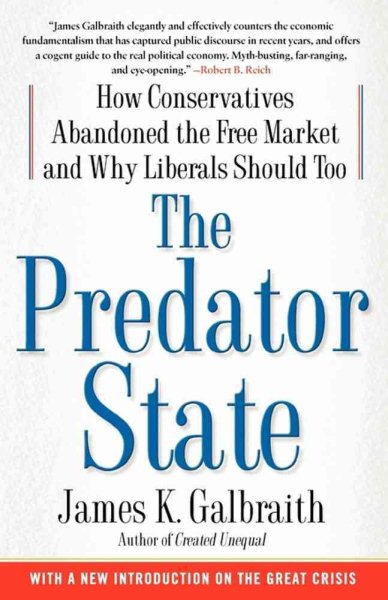 A progressive economist challenges popular conservative-minded economic practices, in a scathing critique of Reagan-Bush policies that contends that the political right is misrepresenting the consequences of free-market and free-trade ideals. 50,000 first printing. Read More
Now available in paperback, this timely book challenges the cult of the free market that has dominated all political and economic discussion since the Reagan revolution. Even many liberals have felt the need to genuflect before the altar of free markets, but in The Predator State, progressive economist James K. Galbraith suggests that, under the Bush administration, conservatives have clearly abandoned the Reagan dogma and replaced it with crony capitalism. Tax cuts for the wealthy, deregulation, and such schemes as privatizing Social Security would divert the national treasury into private hands and give rise to "The Predator State." The real economy, Galbraith argues, has never been entirely free of government support. Indeed, he says, much of our prosperity over the decades has been the result of a mix of private enterprise and public institutions, dating back to the New Deal. While conservatives have paid lip service to free markets as the solution to everything from health care to global warming, it is clear from the current banking and Wall Street upheavals that a lack of federal regulation has led to disaster. With witty insight, Galbraith makes it clear that we live in the age of predation. He sounds the warning bell, but also points the way to a more prosperous and progressive future. Read Less

Goodreads reviews for The Predator State: How Conservatives Abandoned the Free Market and Why Liberals Should Too

The Nature and Logic of Capitalism

The Predator State: How Conservatives Abandoned the Free Mar...