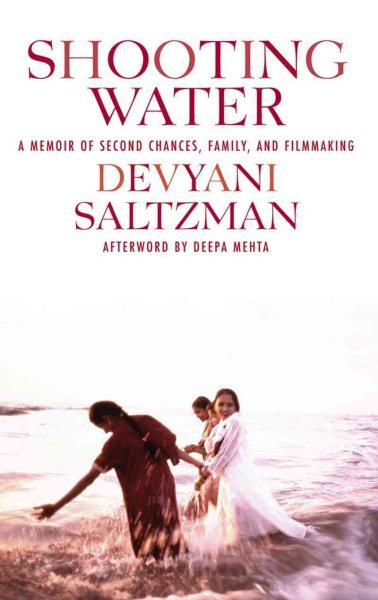 Reveals the intimate story of a daughter's efforts to rekindle her relationship with her mother, award-winning filmmaker Deepa Mehta, during the production of Mehta's most controversial movie, "Water." Read More
This debut memoir, an intimate story of second chances, love and redemption, spans three continents and four countries, as a daughter rekindles her relationship with her filmmaker mother during the production of Water, Deepa Mehta's most controversial movie.Introducing a new literary voice, Shooting Water recounts Devyani Saltzman's remarkable story of reconnecting with her mother, international award-winning filmmaker Deepa Mehta. When Devyani was eleven, her parents divorced, and the courts required her to choose which parent to live with. She chose to live with her father in Toronto and then spent the next eight years navigating between two religions (Hinduism and Judaism), two cultures (Indian and Canadian), two traditions and two people—belonging to both and to neither at once.In late 1999, at the age of nineteen, Devyani was invited by her mother to join her in the holy city of Benares, India, to work on Water, the final installment in Mehta's acclaimed Elements trilogy (which started with Fire and Earth). After only a week of shooting, Water became the target of a series of politically motivated attacks. The movie was shut down. Devyani went off to Oxford and, then, three years later rejoined her mother when production resumed in Sri Lanka. What began as a journey to heal deep wounds from the past turned into a five-year odyssey to complete the film.Transformative and inspiring, Shooting Water chronicles Saltzman's life-changing experience in India, the struggle to produce a film, and, through that struggle, the emergence of a deeper love between mother and daughter. 16 b/w photographs. Read Less

Goodreads reviews for Shooting Water: A Memoir of Second Chances, Family, and Filmmaking

How the Garden Grew